INDIANAPOLIS – On Tuesday, Indiana Democratic Party Chairman John Zody decried what appeared to be a disinformation campaign mounted by America First Policies, a GOP-aligned group with ties to Vice President Mike Pence. In a press conference, Zody called out the organization’s text messages for misrepresenting the facts around early voting.

“It looks like out-of-state groups are working to erode Hoosiers’ confidence in the election by spreading disinformation,” said Zody. “It’s Washington-DC tactics like these that Hoosiers detest. We owe it to voters to get the facts right.”

The text messages in question, which link to the America First Policies website, erroneously inform recipients that October 30 is the last day to early vote in Indiana. The number the text message came from is disconnected. It’s not clear who the messages were sent to or whether they were intended to sow confusion among voters. Zody believed it’s critical Hoosiers know where and when they can early vote. 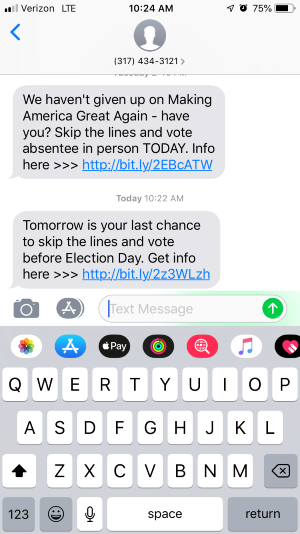 “If there’s one message to take away, it’s that early voting runs through Monday, November 5,” said Zody. “Hoosier voters can log on towww.indianavotesearly.com for a complete listing of early voting locations and times. If America First Policies wants to get it right, they can feel free to use our resource.”