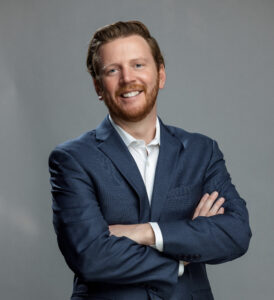 Mike Schmuhl is an organizer, manager, and leader, who has been actively involved in Hoosier politics for the past decade.

During the 2020 electoral cycle, Mike was the national campaign manager of Pete for America, Pete Buttigieg’s groundbreaking presidential campaign and the largest political campaign in Indiana history. The first employee of the campaign, he eventually built and led an organization of nearly 600 team members with over $100 million in resources. Buttigieg became the first LGBTQ presidential candidate to be awarded delegates in American history after winning the Iowa caucuses. Buttigieg now serves as the Secretary of Transportation in the Joe Biden-Kamala Harris Administration.

A native of South Bend, Mike has worked on campaigns for former U.S. Sen. Joe Donnelly (2010), State Senator Shelli Yoder (2016), and businessman Mel Hall (2018). He served as Buttigieg’s first chief of staff in South Bend after running his campaign for mayor in 2011. Schmuhl was then elected the 2nd Congressional District Democratic chairman from 2011 to 2013, becoming the youngest member of the state central committee at the time with full voting rights.

Previously, Mike was vice president at the Democratic consulting firm 270 Strategies in Chicago, where he advised nonprofits, issue-based causes, and labor unions. Before working in politics, he worked in the newsroom of The Washington Post as a producer and booker for broadcast outlets. He also interned for the late Tim Russert at NBC News’ Meet the Press.

Mike received a BA in History from the University of Notre Dame and a MA in International Affairs from Sciences Po in Paris, France.