INDIANAPOLIS – On Tuesday, Hoosier Democrats presented a helping hand and a set of wheels to debate-ducking Indiana Republicans. At a press conference, Indiana Democratic Party Chairman John Zody offered a ride in the chicken limo to any Republican who may be considering skipping public appearances or debates.

“Part of the job for any elected official is showing up and Indiana Republicans can’t even clear that bar,” said Zody. “We wanted to offer a helping hand and thought the chicken limo would be the perfect transportation for hesitant Republicans.” 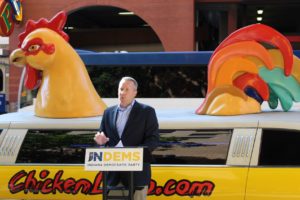 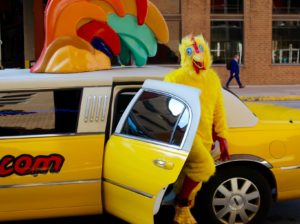 The press conference comes after a growing number of Indiana Republicans have signaled they will not debate their Democratic opponent or attend candidate forums. Indiana Democrats labeled it Debate Dodge Fever and Zody believed the outbreak speaks to Indiana Republicans’ aversion to accountability.

“Being accountable to the folks that sign your paycheck is in the job description,” said Zody. “Republicans don’t even bother showing up. It’s not representative government, it’s just plain arrogant.”