INDIANAPOLIS – Twin outbreaks of Debate Dodge Fever cropped up on Tuesday, one in Evansville, another in Wabash. It’s more proof that the condition will continue to spread among Indiana Republicans.

From the Wabash Plain Dealer Debates are part of democratic process

“Still closer to home is the 17th State Senate District. Democratic candidate Gary Snyder is asking his opponent Sen. Andy Zay for a debate, but a spokesperson for Zay on Tuesday told the Plain Dealer that he currently has no intention of participating.

“We hope he changes his mind. The office he holds is significant, and voters have a right to learn where Zay stands when it comes to legislation the General Assembly may consider next session.

“…all five Republican incumbents chose not to appear at the forum.” 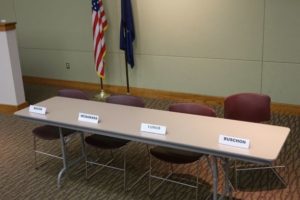 “Indiana Republicans can’t keep hiding. They can’t keep running from the people that sign their paychecks,” said Zody. “Nearly a decade in complete control has Republicans believing they aren’t accountable to working Hoosiers. It’s why they don’t even bother showing up. That’s not representative government, it’s just plain arrogant.”