A Timeline of Mike Pence’s Discrimination Against the LGBT Community

2000: During his congressional campaign, Mike Pence said, “Congress should oppose any effort to put gay and lesbian relationships on an equal legal status with heterosexual marriage.”

2000: Pence also supported the reauthorization of the Ryan White Care Act only if federal dollars were excluded from organizations who “celebrate” and “encourage” behavior that facilitates spreading of the HIV virus. Further, Pence supported this reauthorization only if “those institutions provided assistance to those looking to change their sexual behavior”, an off-the-cuff endorsement for ex-gay conversion therapy.

2004: Mike Pence co-sponsored a proposed amendment to the U.S. Constitution that would define marriage as solely between one man and one woman.

2012: Pence refused to say on the record if he supported a same-sex couple raising a child together.

2015: Governor Pence said on ABC’s “This Week” that it was “absolutely not” a mistake to sign RFRA, throwing Indiana into a $250 million economic panic and putting Indiana’s “Hoosier Hospitality” reputation in jeopardy.

2015: Even after his approval rating plummets from RFRA, Mike Pence on July 22 told the media he is “studying” the issue of LGBT rights and whether or not he’d support across the board protections for the LGBT community. 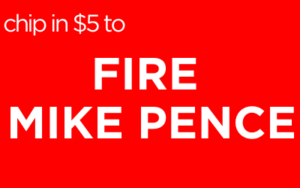